Attractions and tourist events from all over Italy 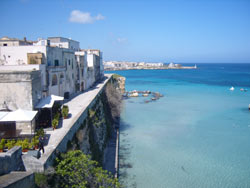 The archipelago of the Tremiti Islands is made up of the islands of San Domino , San Nicola and Capraia , an islet - Cretaccio - and some rocks. It is located 12 nautical miles off the northern coast of the Gargano , in the Adriatic Sea.

Since 1989 the islands, with their rugged coastline and rich in caves, have become a marine nature reserve.

The largest island is that of San Domino, dedicated to tourism, where there is the only sandy beach of the archipelago ( Cala delle Arene ).

In San Nicola are clearly visible signs of the Neolithic, Greek tombs and still the Abbey of S. Maria a Mare with the stupendous mosaic floor and the imposing walls.

In the 18th century the island became a penal colony. Their ancient name was Isole Diomedee, after the Greek hero Diomede, who, according to legend, threw three stones into the sea which then resurfaced as if they were islands. 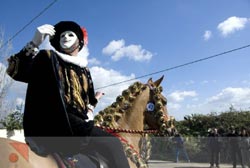 During the Carnival period, in the month of February, parades of masked balls and displays of allegorical floats are held throughout the island. In Cagliari the Carnival processions are cheered up by historical masks and the celebrations close on Holy Tuesday with the stake in which Ciancioffali, the rag doll, is burned. Also very beautiful are the parades of Tempio Pausania , where the effigy of "King George" is burned, of the Guspinese Carnival, with the traditional masked waders, of San Gavino Monreale, of Iglesias, of Santu Lussurgiu and the carnival of Bosa. In Santa Teresa di Gallura the carnival is instead celebrated underwater.

The most spectacular festival is the Sartiglia (whose name derives from the Castilian "sortija" which means "ring") which is held in Oristano on the last Sunday of Carnival and is repeated on Shrove Tuesday. It is a rite to propitiate the good harvest of the year that has just begun. It is an equestrian carousel of Catalan origin that has been running for over five hundred years in via del Duomo, in the historic center of the city.

The capocorsa (su compidori), dressed in a very particular costume, with mask and top hat, parades on horseback through the streets of the city flanked by two knights (su segundu and su terzu).

Followed by a large group of knights, they give life to an unbridled gallop race with the aim of piercing a pierced silver star with the sword, hanging from a green ribbon placed in the center of via Duomo, at the height of the Cathedral. From the number of stars impaled, the auspices for the harvest of the new year will be drawn.

The Carnival of Viareggio 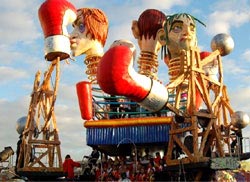 The Carnival of Viareggio with its years of history is undoubtedly the most famous carnival event in Italy, among the most important events in Europe and attracts hundreds of thousands of spectators and tourists from Italy and abroad.

Born in 1873 , the Viareggio Carnival is today a dynamic and lively event, able to attract the attention of all the major Italian and international media and a large audience, within which the most diverse are confused social strata and all age groups.

With its imposing papier-mâché floats , first and second category, its group masquerades and isolated masks, it aims to represent in an ironic key the political and cultural landscape of our nation, placing particular emphasis on errors and gaffe of the most prominent political figures and entertainment.

Ideas for your vacation